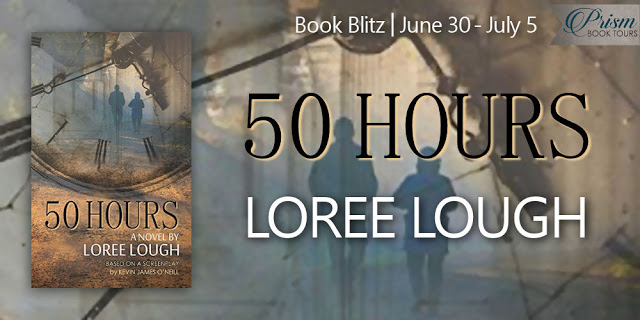 On Tour with Prism Book Tours.
Release Celebration Blitz for
50 Hours
By Loree Lough
Note from the Author
When Kevin J. O’Neill asked me to novelize his screenplay of 50 Hours, I was beyond flattered. He’s a well-established actor, producer, director, and writer, himself, and knows hundreds of talented authors. To say that he hooked me on the story during our very first phone conversation is an understatement. His enthusiasm was contagious, and once I read the actual screenplay, well, I was RE-hooked! Instantly, my mind started whirling with ideas that could broaden and deepen the storyline and the characters: I saw the hospice center in my mind. Envisioned Franco and Aubrey. Built on the screenplay’s basic descriptions until the main characters were well-rounded, believable individuals with interesting backgrounds…and believable, reader-identifiable flaws. I knew right away that these two would need other characters to interact with, so I invented them. They helped me expose the inner fears, thoughts, and joys the main characters were hiding—from others, and from themselves. (Kevin included a bluejay in his screenplay and I loved it so much that I turned it into a secondary character, and oh, what fun I had writing him!)
— Loree

Franco Allessi is a broken, lonely man who wants nothing more than to outrun the ghosts of his past. For years, he tries to numb the pain of his wife’s death with cheap beer and whiskey. When he’s convicted of drunk driving, the judge revokes his license for six months and orders him to serve fifty hours of community service. Franco chooses Savannah Falls Hospice for no reason other than it’s walking distance from his dilapidated house trailer. On his first day on the job, he meets Aubrey Brewer, a woman whose time on earth is quickly ticking to a stop. Their unusual connection teaches powerful, life-changing lessons about friendship, acceptance, and the importance of appreciating that precious treasure called Life.

Loree Lough is an exceptional author, and that’s why I approached her about writing the novel for my Feature film, 50 Hours. But I had no idea how wonderful her novelization would be until I read it. Loree was able to dig so deep into my characters. She unearthed and richly developed the film’s skeletal characters and give them three dimensional lives. I am so happy with the book! — Kevin O’Neill, writer/director/actor/producer

I defy anyone to start the beautifully written 50 Hours and to put it down or to go on with their own lives as they had before reading about the remarkable, emotional and insightful relationship between dying Aubrey and the lost Franco. As a recent widow myself, the strength, humor and respect between the main characters shot close to home, but delivered so much hope and love that even as I march forward to tomorrow, my perspective has altered—all to the positive. In her last days in this life, Aubrey finally lives out the dreams she’s been too browbeaten by her mother and ex-husband to accomplish. She can only do this with help from Franco, who risks imprisonment to see her wish come true. Emerson said, “To know even one life has breathed easier because you have lived, this is to have succeeded.” Aubrey and Franco succeeded. Believe me when I say, THIS IS THE KIND OF BOOK THAT WINS PULITZER PRIZES. — Catherine Lanigan, Author of Romancing the Stone, The Jewel of the Nile, and over forty-five novels and non-fiction

50 Hours is a moving story about love, loss, friendship, and last chances. It’s a reminder that our lives are precious stories, no matter how long or short. This is a must-read for all of us who have been touched by cancer – victims, caregivers, family, and friends. This poignant and touching tale will inspire hope in the midst of even the darkest hours. — Cerella Sechrist, author of the popular Findlay Roads series from Harlequin

He hustled down the hall and stood beside her. “What’s up, kiddo? Thirsty? Need a pain pill?”

She was only using half the bed, so he doubled the blanket and bedspread over her.

When she shook her head, he raced back down the hall to gather up his linens. But even with the extra quilt, Aubrey continued shivering.

“I could pile bath towels and jackets on top of that . . . or get into bed beside you, let my body heat warm you up.”

She patted the mattress, then rolled onto her side. “Would you? Please?”

Franco slid under the covers and tucked in close behind her. It took a full five minutes before her breathing slowed and she stopped shaking—he knew exactly how long it had taken, because he’d watched every flick of the glowing blue numbers on the LED alarm on the night table.

Being this close to her was the oddest sensation, because not once in their hours together had she roused sexual feelings in him. She still hadn’t. And yet, he’d never felt this way about any woman, not even Jill. Franco held her a little tighter. With time running out, this was as close as they’d ever be. If only he could share good health and stamina the way he was sharing warmth.

Aubrey moved, and he whispered, “Sorry. Didn’t mean to wake you.”

“I’m the most selfish woman on earth.”

“You realize how much trouble you’re in?” was her sleepy reply.

“If the cops find us, you might have to serve time. And not just fifty hours of community service.”

Yeah, he knew, and didn’t care. It felt good, felt right, doing these small things for her. The ugly truth was, when he got out of jail—however long that might take—he’d still be alive. And Aubrey? Aubrey would be—

“I’m positively evil, asking you to take such a risk.”

“I know.”
About the Author Bestselling author LOREE LOUGH once sang for her supper, performing across the U.S. and Canada. Now and then, she blows the dust from her 6-string to croon a tune or two, but mostly, she writes novels that have earned hundreds of industry and “Readers’ Choice” awards, 4- and 5-star reviews, and 7 book-to-movie options. The Man She Knew, #1 in her “By Way of the Lighthouse” series, her 3rd for Harlequin Heartwarming, is available at Amazon, Barnes and Noble, and Harlequin.com.
Website│Goodreads│Facebook│Twitter│Pinterest
Blitz Giveaway