Author’s name: Alex Steinberg
Title of book and/or series: Millennium
Brief summary of the story:
In 2091, four years before the Great Civil War, Humanity expanded to a multitude of planets across the galaxy, setting up colonies, officially declaring themselves to be the only sentient life in the Milky Way Galaxy. They were wrong.
Nine years later, Lieutenant Commander Keane Blaze, a young, but well-respected soldier, is ordered to help evacuate the colony on Ordem, a strange desert planet. Everything goes as planned at first, until an unknown enemy initiates an ambush, destroying Keane’s transport. In order to save him, the ship’s artificial intelligence launches his cryo-pod to the surface of the planet, putting Keane into cryo-sleep for 1000 years.
Waking after his long slumber, Keane learns the enemy that long ago destroyed his transport is back, again fighting against Humanity and its allied races. With the help of a younger alien race and a mysterious figure from his past, Keane races to end the threat that this enemy poses, once and for all.
Brief description of the world or location you created for this story:
Millennium is set in the Milky Way Galaxy, starting off on the Human colony of Ordem. Later into the story, the plot transfers to the Eskrate 223, a large space station on the edge of known civilization that hosts the Cajin King, The Spectre commander, and a human delegate.
If we were to visit the Eskrate as tourists, what would you recommend that we see or do there?
Well, there’s tons of things to do! You could visit the Lunar academy, which trains military officers. There is Wanata Beach, the first man made beach in space. You could visit the Cajin gardens, or go grab a bite to eat at The Bar, a Spectre owned restaurant.
What dangers should we avoid in the Eskrate?
Since the Eskrate is home to a variety of important officials, there isn’t much danger. You may have the occasional pirate raid or crime, but most threats are stopped by the police and military force.
Is there a distinct or unusual type of food or meal that we might be served on the Eskrate? Human culture has influenced the development of the station significantly. Therefore, you can find familiar foods such as burgers, salad, and sandwiches. However, you can also find traditional Cajin foods like their famous red wine, or their styled sushi.
What types of weaponry or fighting styles are common on the Eskrate?
The military, HCSTA, used the most advanced weaponry available. Their ammunition varies from graphine bullets to laser induced plasma. Both of these types of ammunition vary on the target, using the bullets against unarmored targets and the plasma against armored opponents. Black Hole grenades are also implemented in warfare.
What types of vehicles, animals, technology, etc. are used to travel to the Eskrate?
Since the Eskrate is in space, the only way to travel there is a certified ship, preferably a destroyer, carrier, or frigate equipt with a slip space engine.
What types of plants, animals, or sentient races might we encounter on the Eskrate that we don’t see on Earth?
As stated before, the king of the Cajin race is living on the Eskrate. The Spectres are alsostationed there, as well as the Actuell and the Txuasentshai. All of these are not found on Earth,
What role, if any, does magic or the supernatural play in the lives of people in Millennium?  If there is magic, please give some examples of what it involves or how it’s used.
None. The universe of Millennium is magic free.
Is there any advanced or unusual technology on the Eskrate?  If you haven’t described it already, please give some examples.
Yes. Magnetic cars free up space and help transportation, as well as transporting goods much more quickly. Energy shields are vital to the protection of the station, and ships help move items and people.
Are the days of the week and months of the year the same on the Eskrate as on Earth? What holidays or special events are celebrated regularly there?  Yes, the dates are the same. The Eskrate follows the Earth Calendar, which makes it easier for the human government to link up dates.
Is there a particular religion practiced on the Eskrate?  Please describe what it involves.
Other than ancient human religions, no.
What is the political or government structure on the Eskrate?  Who is in charge there at the moment, and what kind of leader is he/she? 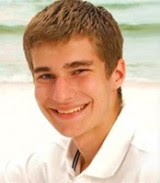 The government is composed of a trio of three leaders: Rippa, The Specter commander, Leonidas, The Cajin king, and Ben, the human delegate. These three men serve as the presidents of the Eskrate, while a larger congregation of elected officials serves as a parliament.
Author Autobiography:
I’m a young author and a senior in high school! I’ve got big plans for the future, and hope to write many more books!
Where, and in what formats, can we purchase your book?
Amazon and Barnes and Noble
Where can readers connect with you online?  https://www.facebook.com/Millenniumstory
I hope you all enjoyed the trip to the Eskrate.  Questions about the world or the book?  Ask them in the comments and the author will get back to you!

Please join us again next Monday for a trip to another world, in Realm Explorers Part LXXV!
-Annie Douglass Lima