Review & Excerpt Tour Grand Finale for
Make Me a Match
By Melinda Curtis, Cari Lynn Webb, & Anna J. Stewart
Did you enjoy meeting Cooper, Ty, and Gideon, three childhood friends all grown up and seeking love? If you missed any of the excerpts or reviews, go back and check them out now…
Launch – Intro to the Compilation

And in Kenkamken Bay, Alaska, childhood friends: Cooper Hamilton, Ty Porter and Gideon Walker are family: they’ve dreamed together, failed together and stalled out in life together. And now they plan to change their futures together as match-makers.

“. . . once they put their efforts into helping the single members of the community improve their social lives the stories got more fun as they came up with interesting group activities to do in the dead of winter. The first two stories were okay but I loved the third one!”

I Am A Reader – Excerpt from Baby, Baby

The inner front door opened and a woman stepped in. She was wrapped from neck to snow boots in a reddish-brown parka that made her look like a stuffed sausage. Conversation in the room died away as every pair of male eyes turned toward her. She peeled off her knit cap, revealing shoulder-length, glossy blond hair and artfully applied makeup.

“Sometimes, novellas that are connected but are written by different authors don’t feel cohesive, but in this case, the collection flowed seamlessly from one novella to the next.”

And the witty, handsome man she’d met ten months ago with the mischievous smile? He wasn’t witty—he was speechless. He wasn’t handsome—his dark hair brushed his shoulders unevenly and grew from his chin in short, thick stubs. He wasn’t smiling—his lips formed a shell-shocked, silent O.

Ty leaned down to whisper in her ear. “Let’s be clear, K.J., we’ve seen these ladies before. They’ve taken our survey before. You’ve done nothing for me.”

As gray as Gideon saw his world, Sophie lightened up any space she walked into with her ebullient and gregarious personality—character traits Gideon both appreciated and worried about. Not everyone was as protective as he was prone to be when it came to Sophie Jennings.

“The first book sets things up and the last one ties things together. I liked that each book was by a different author. It helped separate the characters and define them as individuals with their own voice.”

“The authors did an amazing job of making the stories seamless. The major characters were in each of the stories and they were consistent. I also love that the stories are all clean! If you’re looking for a fun Valentine’s Day read, check this one out!!”

“4 STARS! . . . This is a compilation of three short stories that revolve around a group of friends.”

Underneath the Covers – Excerpt from Suddenly Sophie

If she’d ever doubted the universe was determined to make her its comic relief, she now had solid proof. Stuffy Gideon probably disapproved of Sophie’s tendency toward taking chances, but what was the point in living if you weren’t going to go after life with a bit of gusto and purpose?

“I loved that each story has a unique voice, which is really pronounced by having a different author write each one. I enjoyed my time in Kenkamken, Alaska with these great people!” 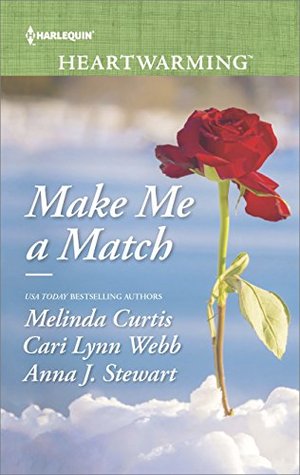 BABY, BABY: One special night with Cooper Hamilton gave Nora Perry a precious gift. But no way is the sweet-talking salesman the right guy for her…or is he?

THE MATCHMAKER WORE SKATES: Former pro athlete Ty Porter could get burned when he falls for the beautiful reporter who ruined his career—and could now expose his most zealously guarded secret!

SUDDENLY SOPHIE: Gideon Walker has a long history with free-spirited flower shop owner Sophie Jennings. But when the banker-matchmaker fixes her up with potential candidates, he realizes he’s made a terrible mistake… Cari Lynn Webb lives in Alabama with her family. If she isn’t at her computer, she can usually be found: picking up her daughters from school, dropping off at swimming or soccer practice or running into the grocery store for that one thing she forgot on her shopping list. She loves escaping into a romance and her e-reader can usually be found in her passenger seat. Visit her at: www.carilynnwebb.com.

You’ve met Anna J. Stewart (or someone like her) before. She was the girl who spun in circles on the playground hoping her Wonder Woman costume would magically appear before playing cops and robbers a la Charlie’s Angels–as Sabrina (she was the smart one). Anna was the girl in the back of the class with a paperback romance hidden in her algebra book (and yes, she failed algebra).

Growing up in the 70′s and 80′s meant there weren’t a lot of YA books, so she ventured early into mainstream fiction and read Stephen King’s CARRIE at the age of 8. Discovering Nora Roberts and romance novels early in high school opened her eyes to the wonders of storytelling and the beauty of a happily ever after.
So here she is, many years later with an English degree from CSU Sacramento, an RWA Golden Heart nomination behind her, countless stories in her head, and a serious addiction to STAR TREK, SUPERNATURAL, and SHERLOCK. She recently wrapped up a nearly 8-year stint working as assistant to NYTimes bestselling author Brenda Novak where she helped run Brenda’s annual online auction for diabetes research. When she’s not writing or reading (which she never has enough time for!), she’s working on dollhouse miniatures and tolerating her overly-affectionate cat named Snickers (or perhaps it’s Snickers who tolerates her).
Website – Goodreads – Facebook – Twitter – Pinterest – Instagram
Tour Giveaway