Do you know about Noblebright Fantasy?
Noblebright Fantasy refers to stories in which the main motivation of the characters is an altruistic proposal or quest, and the world in which they live upholds hope and the possibility of better. Noblebright characters choose to act with kindness and honor, are rewarded for their good qualities, and their world, although not perfect, is beautiful and valuable. Brand new Epic/High Fantasy collection “Heroes and Swords”, brings you a selection of Noblebright stories with strong heroes and magical worlds that will take you back to the times of classic fantasy. Here’s a sneak peek of what you’ll find!

An Epic Quest Through The Magical World of Havenglade
A sinister wizard.
A mysterious teacher.
A kingdom on the brink of collapse.
In the ancient kingdom of Havenglade, a brutal enemy is ravaging the countryside making his way closer to Gradur Castle. An aging king seeks protection from a council of loyal wizards. A peasant girl finds herself at the center of it all after bonding with a magical crystal and absorbing its magical essence.
After losing her parents, Laurena was given the chance of a lifetime to study wizardry under the mysterious and renowned teacher Unai.†Can she learn to harness the powers inside her before it’s too late?

Noblebright is a subgenre which often ties into fantasy stories. When I wrote Daughter of Havenglade one of the main goals was to give the world a female hero who could “save the world” while not appearing overly powerful or unbeatable. She suffers many of the physical symptoms of anxiety but she still manages to overcome many of her fears and self-doubts. Our heroine Laurena, goes from an unsure and troubled girl into a confident, capable woman.†
She looks out for others. She doesn’t have longings for fame or fortune. She is noblebright because she wants to be on the side that protects the weak. She is noblebright because she will turn against her own kingdom if it stops caring for its people, and she is noblebright because her parents raised her that way. 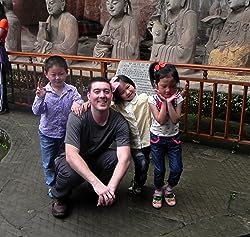 H.C. Harrington is the author of the epic fantasy series Daughter of Havenglade. His recent work includes Daughter of Havenglade, Black Dragon Deceivers, The Night Thief, and the soon to be released Blood Cauldron.
H.C. graduated from the University of Nevada, Reno with a B.A. in Anthropology and History. After putting a hold on summertime archaeological digs in the Sierra Nevadas H.C. moved to Chengdu, China, to study Chinese language and culture. Along the way, he’s visited or lived in over a dozen different countries.
His hobbies include traveling, writing stories, reading anything he can get his hands on, backpacking, and trying new things.

In the spirit of the classic fantasy of Tolkien, Terry Pratchett and Brandon Sanderson, authors of Noblebright Fantasy all around the world have come together in this E-book giveaway. With stories that are uplifting and full of hope, and heroes who strive for goodness and fight to save their worlds,†Heroes and Swords†will transport readers back to the glory of heroic fantasies, fabulous quests and characters full of charisma and courage.