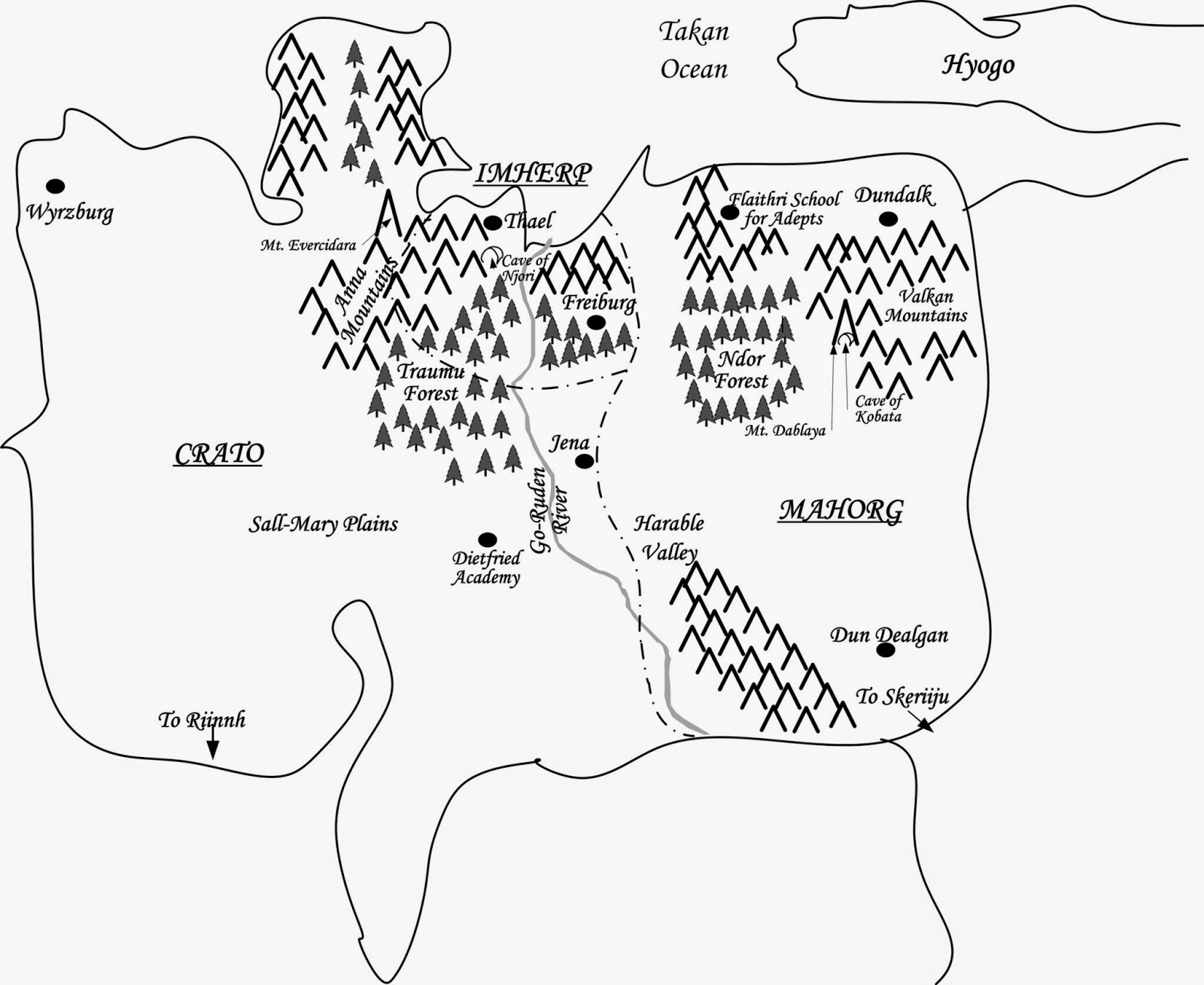 If we were to visit Ramajadin as tourists, what would you recommend that we see or do there?
Wyrzburg, royal city of Mahorg is a really nice place to visit.
Sanctuary of Nine Dragons located in Imherp: A nice place to visit if Asha is willing to reveal it to you. Frieberg royal city of Imherp and home to the Kningrad.
What dangers should we avoid in Crato?
Unfortunately the country of Crato especially the city of Dun Dealgan. The country is still recovering from the devestation caused by the evil that still has a presence there. Another place to avoid would be Grillwood the land of the Mantion.
Is there a distinct or unusual type of food or meal that we might be served in Ramajadin?
A liliad or a rosa root pie. Roasted pidgekin (similar to chickens) heatherkin cakes, baked yellow breaded yallow root.
What types of weaponry or fighting styles are common on Ramajadin?
Swords, daggers and hand to hand combat and magic.
What types of vehicles, animals, technology, etc. are used to travel?
Dragons, horses, wagons
What types of plants, animals, or sentient races might we encounter on Ramajadin that we don’t see on earth?
Kningrad of Imherp similar to the elves in LOTR, Mantion of Grillwood similar to the dwarves in LOTR.  Tigres, very large tigers, dragons, glingkol and koali trees, rosas, liliad,
What role, if any, does magic or the supernatural play in the lives of people on Ramajadin?  If there is magic, please give some examples of what it involves or how it’s used.
There are two kinds of magic; The magic of Asha that is only used to heal the land and people, usually performed by adepts and used for good. After the wars this magic is used to heal the land. The Kningrad and dragons are more tuned into the powers of Asha.
The magic of Sidramah is the other and is used for destruction. It uses the emotions of the wizard like anger, jealousy and hatred to destroy. Usually performed by wizards and is used for evil ends. During the wars this was used to destroy the land and kill people. King Brandan and the Mantion use it to shapeshift so as to fool people into thinking they are someone other than who they truly are. The Mantion are more tuned into the powers of Sidramah.
Tell us about any sports, games, or activities that are available for entertainment on Ramajadin.
Jousting games, a game similar to soccer (Mantion use a skull for a ball, others use a ball)
Are the days of the week and months of the year the same on Ramajadin as on earth? What holidays or special events are celebrated regularly there?
They have four seasons and their calendars are similar to ours.
Is there a particular religion practiced on Ramajadin?  Please describe what it involves.
The religion of Ramajadin is very similar to Christianity.  The Annals of Time is similar to the Bible. Asha is the embodiment of good and nine dragons serve as his emissaries to Ramajadin while Sidramah is the embodiment of evil and has enslaved some dragons to do his bidding. Abbots serve Asha and Wisdoms serve Sidramah.
What is the political or government structure in Mahorg and Crato?  Who is in charge there at the moment, and what kind of leader is he/she?
There are four countries:
Crato: has a king and queen; one is a Master Adept and the other Warrior Chief. In Palace of the Twelve Pillars King Theodric (from Crato) and Queen Lilia (from Mahorg) rule and are well loved by the citizens of Crato. Theodric dies at the end of the book and Lilia disappears. At the beginning of Palace of the Three Crosses one of their twin sons, Joachim is crowned king and married to Princess Maeve of Imherp. Both are inexperienced and trusting. Joachim is impetuous and loyal to his brother which compromises his leadership. Maeve steps up and becomes the trusted ruler of Crato in her husband’s stead.
There is also an Adept Council who advise the king. The council consists of the Master Abbot (the religious leader) and Master Adept
Mahorg: has a king who is Master Wizard and Warrior. King Waldrom is the evil king of Mahorg. His people hate and fear him. At the end of Twelve Pillars he is captured by the Mantion, leaving his country without a king. Prince Brandan, Theodric’s other son, is crowned king of Mahorg. His reign will be short lived as he travels the path of evil set by his predecessor.
Grillwood is ruled by the Mantion king who is a Master Wizard. Grillwood is ruled by King Shigeo with the help of Master Wizard Melvane.
Imherp has a king who is a Master Adept and a queen. Imherp is ruled by King Eyvindur and Queen Fiona. He is a good king and his people love him.

Has anything in your actual life inspired the locations, cultures, etc. in your book?

It was loosely based on medieval Ireland and Germany with a touch of Japan thrown in for the prison island.
What, if any, “hot-button” or controversial topics do you touch on in your book?
Even though it was not really obvious, there was a suggestion of  racism and bigotry. Not many readers knew it but the Mahorganites were a dark skinned people while the Cratonites were light skinned. And of course there were the Mantion and Kningrad with a mixing of all the races. The other more obvious topic was the battle of good and evil with religious overtones.

Author Autobiography:
Christina Weigand’s a writer, wife, and mother of three grown children and a middle school daughter. She is also Nana to three granddaughters. She lives with her husband and youngest daughter in Pennsylvania, returning there after a short sabbatical in Washington. Currently, she’s working on fantasy novels and inspirational writing. Through her writing, she strives to share the Word of God and help people young and old to realize the love and mercy He has for everyone.
When she’s not writing, she’s active in her local Church Bible Study and volunteering at her daughter’s school, helping the children develop a love for reading and writing. Jesus fills her home with love as she shares Him through her writing.
Where, and in what formats, can we purchase your books?  Please include links.
The books can be purchased in any e-format at https://museituppublishing.com/bookstore/index.php/manufacturer/christina-weigand/young-adult
Where can readers connect with you online?
Blog: www.weigandchris.com
Twitter: https://twitter.com/CAWeigand
Facebook: www.facebook.com/caweigand
Email: [email protected]
Goodreads: www.goodreads.com/chris_weigand
Amazon: amazon.com/author/christinaweigand
I hope you all enjoyed the trip to Ramajadin.  Questions about the world or the book?  Ask them in the comments and the author will get back to you!