Is there any advanced or unusual technology in Beinan?  If you haven’t described it already, please give some examples.
Modern weapons on planet Beinan use lasers and plasma bolts such as in laser spears, laser crossbows (laser beams firing plasma bolts), and laser épées.  Low altitude and mid-range shuttles fly instead of moving on the ground. Trains run on a monorail in an advanced version of maglev technology.  Star craft are able to travel to worlds in distant galaxies, often doing so with the help of advanced alien technology.
Tell us about any sports, games, or activities that are available for entertainment in Beinan.
Beinarian nobles and royals love fine food and dancing, particularly the Beinarian variant on English country dancing.  In addition martial arts, fencing, and archery remain popular across many noble houses.
Are the days of the week and months of the year the same in Beinan as on Earth? What holidays or special events are celebrated regularly there?
There are 197.26 beinors (Beinarian days) per yen-ar (Beinarian years).  Beinors (Beinarian days) are numbered 1 to 197 or 198 in the case of a yeap yen-ar.  “Beinor 1” is the start of the Beinarian yen-ar and is typically celebrated with fireworks, feasting, and dancing.
Is there a particular religion practiced in Beinan?  Please describe what it involves.
There are two major religions on planet Beinan.  The primary religion worships a triple goddess similar to the Morrigan of ancient Britain.  The three goddesses are:  Abka Biya (goddess of the moon), Abka Gahun (goddess of birds of prey), and Banumu Hehe (goddess of Beinan the land).  The high priestess of house Miyoo heads this dominant religion where both women and men serve as priestesses and priests as equals.  In this tradition, belief is in reincarnation.  Direct, mystical experiences are the main ways that worshippers discover and understand the goddesses. Science is regarded as a sacred form of religious expression.  As you might expect, environmental stewardship is also key to belief and practice as the divine faces are manifest across nature.  Followers of the triple goddesses uphold generally liberal values, allowing worshippers to follow their own conscience on matters of marriage, child rearing, divorce, and sexuality.
The other major religion is centred in house Shem where they worship the Shemai, a male creator god similar to the one worshipped in Abrahamic religions. People are believed to be born and die only once after which they go into an eternal afterlife. Like in the Abrahamic religions, worshippers have a written scripture they use to learn about and understand the Shemai’s commands. Religious leadership is restricted to men with priests called sacerdos and the high priest called sacerdos maximus.  Psychic abilities are regarded as evil and perverse.  Values are conservative with non-marital sex, contraception, abortion, and divorce all highly discouraged.
What is the political or government structure in Beinan?  Who is in charge there at the moment, and what kind of leader is he/she?
Beinan is ruled by a feudal constitutional monarchy based on medieval, renaissance, and modern England and Scotland.  The Great Council of Beinan serves as the lawmaking branch of government with delegates from all of the noble houses represented; excluding the non-noble houses of Plover, Skeinera, and Croften making these houses a form of under class.   Executive and supreme judicial powers are vested in the monarchy.  Kings and queens rule with the consent of the Great Council and, in theory, can be overthrown at any time if they abuse their power.  In practice, government corruption runs rampant enabling absolute despots like King Gareth I (The Poisoned Ground) free rein to do as they please.
Dynastic change is achieved by votes of the Great Council.  As dynastic change is usually contested (often by force of arms) by the outgoing noble house, the Great Council rarely votes in favour of it.
Most of the Peers of Beinan Series focuses on the Gurun dynasty which reigned the longest in the Beinarian Era.  The Legacy of Princess Anlei begins with Queen Isabelle and her consort Prince Bevin, a knight of Ten-Ar.  The last Gurun monarch in the trilogy is Queen Constance the Kind who is eventually overthrown by the murderous Lord Yelu in The Great Revolution.  Queen Constance’s daughter Princess Anyu escapes at the end of “The Ghosts of the Past” with her exile, return to Beinan, and fight against Lord Yelu’s tyranny being told in the series’ final book, “Princess Anyu Returns.”
What, if any, “hot-button” or controversial topics do you touch on in your book?
The Peers of Beinan Series follows in the Star Trek tradition of offering thought provoking explorations of social issues.
In particular the Poisoned Ground was ripped from the headlines with its look at the effects of strip mining on local communities.  In this novella government corruption and corporate greed come together to endanger the population of the southwestern city of Nan-li, consciously ignoring safety measures designed to protect the city.  In part two of the Poisoned Ground I look at rape and domestic violence with a special message to women.
In the Legacy of Princess Anlei Trilogy I look at how in vitro fertilization (IVF) technology might be abused for political purposes if we are not careful to put in place strong ethical standards.
Finally I explore the question of terrorism and religion in the Ghosts of the Past, reflecting on my own 9/11 experiences living just five to ten miles from the World Trade Center at the time. 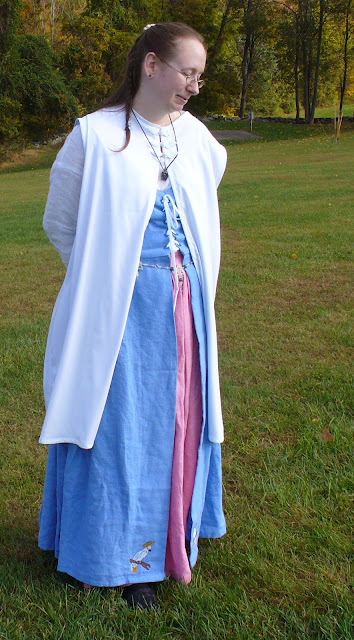 Author Autobiography:
Born, raised, and educated in Lincoln, Nebraska, USA, author-historian Laurel A. Rockefeller has written over a dozen book titles since August 2012 including The Peers of Beinan science fiction series, American Stories, the Legendary Women of World History biography series, and her latest passion: the My First Cockatiel Series.
A literary author with a cosy fireside narrative style, Ms. Rockefeller’s books come to life in audio editions narrated by Mr. Richard Mann on Audible and UK Audible.
A devoted animal lover, Ms. Rockefeller is owned by her two beautiful cockatiels, both of whom will be moving with her to England following approval of her UK residency visa.
Where, and in what formats, can we purchase your books?
Find these and other Peers of Beinan Series books on Amazon:
●      The Great Succession Crisis in Englishand Chinese for kindle and in paperback;
●      The Ghosts of the Past for kindle and in paperback;
●      Princess Anyu Returns for kindleand in paperback;
●      Good-bye A672E92 Quintus for kindleand in paperback;
●      The Poisoned Ground for kindleand in paperback.
The entire series is also available on Smashwordsin your choice of formats and on ibookstore.
Enjoy the Legendary Women of World History Series on Amazon:
●      Boudicca:  Britain’s Queen of the Iceni for kindle in Englishand in Chinese, plus paperback, and Audibleedition;
●      Catherine de Valois for kindle,in paperback, and on Audible;
●      Mary Queen of the Scots for kindleand in paperback.
Enjoy the entire Legendary Women of World History Series on Smashwordsin your choice of formats.
UK residents:  come out to Southcart Books in Walsall and discover the Peers of Beinan and Legendary Women of World History Series from the comfort of their cosy reading room or head to their Amazon store.
Where can readers connect with you online?
Email: [email protected]
Skype:  peersofbeinan
Website
Facebook
Twitter
Pinterest
I hope you all enjoyed the trip to Beinan.  Questions about the world or the book?  Ask them in the comments and the author will get back to you!

Please join us again next Monday for a trip to the fantasy world of Aerisia, in Realm Explorers Part LI!
-Annie Douglass Lima