Contact
$0.00
Cover Reveal: Bonds of Loyalty (and Enter to Win an Amazon Gift Card!)
To post this Cover Reveal (html) and add your Social Media to the Rafflecopter, email us at prismbooktours(at)gmail.com with “Bonds of Loyalty” in the subject line!

Welcome to the Cover Reveal for: “It shall be the son, the firstborn in the new monarchy, who shall quiet the fears and unite the nation again.”
The infamous prophecy declaring that the firstborn would be a boy is the last thing Sarah wants to deal with. As if being newly engaged isn’t difficult enough, she’s still coming to terms with the fact that the first eighteen years of her life were a farce. The prophecy—the reason she had been secreted away from her family and her royal heritage to begin with—wasn’t supposed to disrupt her life any more than it previously had. But when unexpected events force her to leave her fiancé, Prince Alexander, Sarah must return to her home country of Kyrnidan to face her destiny.
Reunited with her royal family, Sarah is thrust into the political turmoil that surrounds her ancestral home. To make things worse, her arrival has upturned the long-held prophecy.
As the voices of distension mount against her, Sarah turns to her bodyguard, Luther, for protection. But Luther’s protection comes with a price. Propelled into a plot that threatens her life and the welfare of the entire kingdom, Sarah must determine where her love and loyalty truly lie. Torn between two men, she will now have to face her fears and undertake a journey of self-discovery that will change the fate of a nation….
Mark of Royalty is the book previous to this. Although Bonds of Loyalty is the continuation of Sarah’s story it is a stand alone book. 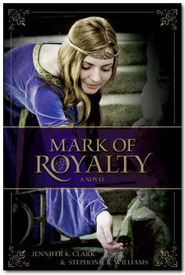 At a time when royal infants are marked at birth, a royal advisor makes a terrible misstep — and an infant princess must be secreted away to save her life. Named Sarah by Miranda, the woman who agrees to raise the child as her own, the girl is unaware of her royal heritage — even though Miranda has done all she can to pair Sarah with the king’s nephew, Lord Chad. But unexpected events prevent the expected betrothal.
Determined to fulfill her devoted mother’s wishes, Sarah reserves her heart for Chad despite her growing affections for another man. But as plots against the crown unfold, someone accidentally discovers Sarah’s mark of royalty — setting the stage for discoveries that will shake the kingdom to its core.
You can find a music video for Mark of Royalty here and a book trailer here.
Amazon – Barnes and Noble

Jennifer K. Clark and Stephonie K. Williams are sisters by chance but became friends by choice when a year of rooming together at college taught them how to get along. Now “play”-at-home moms, separated and living in different parts of the country, they stay in touch and support each other in their individual projects.

Jennifer K. Clark lives in the small rural town of Wellington Utah, as much as her husband wishes it was Wellington New Zealand. After years of entertaining her three children with infamous made-up stories, she decided to put her imagination to good use and became an author. She likes to add a touch of romance to her novels along with a healthy dose of adventure. Fueled by Lindt Chocolate Truffles and Sour Patch Kids, she now spends a copious amount of time with the characters in her head. In her spare time she likes to create science experiments with the ingredients in her potions cupboard, debate which Doctor is her favorite (currently the 10th…or maybe the 11th), and—when she has time—watches the A&E version of Pride and Prejudice.

Stephonie K. Williams makes her home in a quaint farming town in eastern Iowa with her husband, three cats, and a budding ninja. Two of her favorite things in Iowa are the fireflies (aka lightning bugs) and cows, especially the calves. Despite having lived there for 15 years she still misses the majesty and tranquility of the mountains of Utah where she grew up. She has a vast collection of fortune cookie fortunes because she has yet to determine if it is unlucky to throw them away. She also loves to quill, the art of rolled paper, not to be confused with quilting.

Stephonie is passionate about education and enjoys visiting schools to teach classes on creative writing. She has written poetry, short stories, and dissertations, although Mark of Royalty was the first of her work that she was brave enough to submit for publication.

One Reply to “Cover Reveal: Bonds of Loyalty (and Enter to Win an Amazon Gift Card!)”

No, I wouldn't want to be royalty. Thanks for the giveaway. 🙂